Lifestyle Rewards is an exclusive benefit only for members of
The Royal College of Ophthalmologists.

The first, and the best in the great, male grooming tradition.

The 21st October 1805 was a great day to be British. Not only Lord Nelson defeated the French and Spanish at the Battle of Trafalgar, but London’s best loved barber shop and perfumer opened its doors. Truefitt & Hill has been grooming the gentlemen of St. James’s ever since, earning the title of ‘oldest barber business in the world’, as confirmed by the Guinness Book of Records.

More than two centuries later, Truefitt & Hill is much more than just a barbershop. It is a brand synonymous with timeless elegance, whose fragrances and grooming accessories capture the best of British heritage, and which has gained global following resulting in Truefitt & Hill stores opening in many corners of the world.

Truefitt’s roots are deeply embedded in the establishment. Its founder, William Francis Truefitt, became court wig-maker, hair-cutter and head-dresser to King George III. Truefitt has continued to serve every monarch through nine consecutive reigns, and right up to the present day it maintains its position as Royal Warrant holder to the Duke of Edinburgh.

Truefitt has also won the affections of dozens of notable figures, from Charles Dickens and Thackeray – both of whom refer to Truefitt in their works – to Winston Churchill, the Duke of Wellington, Alfred Hitchcock and Laurence Olivier. Indeed, Truefitt’s backstory reads like a ‘Who’s Who’, with a plot that could inspire a Hollywood film.

Its current premises, at 71 St. James’s Street, lie surrounded by the venerated gentlemen’s clubs. The interior is adorned with portraits of patrons past, who keep an ever-watchful eye from the ornate wood and plaster walls. Together with the dark sheen of mahogany and a subtle fragrance of cologne, the impression is of another age. It is only when one is attended to by a young, impeccably turned out barber, that you realise that the best grooming traditions have been passed down from generation to generation of Master Barbers, from 1805 to 2018.

For Truefitt & Hill lives very much in the present. Its expert team continues to develop its products, recently relaunching its C.A.R. range of hair preparations. These were first created in the early 1900s for the Royal Automobile Club, to help pioneering early motorists stay perfectly coiffured while out driving. Now, Truefitt & Hill has partnered with another quintessential British brand, Morgan Motors, to relaunch the C.A.R. range.

“We are delighted to be joining forces with Morgan – an iconic name in British motoring,” says Joanna Broughton, CEO of Truefitt & Hill. “We are proud to associate C.A.R Cream and C.A.R. Lotion, which continue to be two of our most popular hair maintenance preparations, with Morgan - a brand with such a remarkable history and heritage.”

When Prince Philip celebrated Truefitt’s 200th anniversary in 2005, he predicted another 200 years of success. It is therefore no wonder that when one American visitor entered the salon recently, he said, “Son, take your cap off. We’re in the presence of Kings!”

It is this combination of a rich history and a bright and innovative future that gives Truefitt & Hill its unique timelessness.

Searching for the perfect shaving routine?

Too often, gentlemen think that once they are finished with the razor their job is done. With over 200 years’ experience in gentlemen’s  grooming, Truefitt & Hill can confidently say that the perfect routine doesn’t finish there and it’s imperative to look after you skin with a high quality Aftershave Balm the finish off your shaving routine.

Back to Clothing, Beauty & Cosmetics 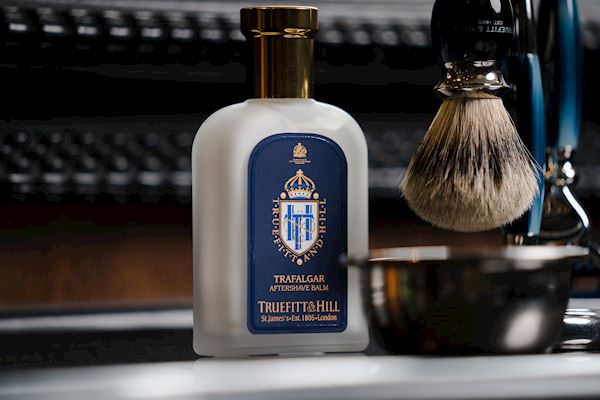